Last month my column ended with, “while Christian broadcasting continued to expand in the USA and other parts of the world, the Canadian regulators arrested the possibility of having religious (mainly Christian) radio stations in Canada for almost fifty years.”

Thankfully, after the ban against Christian broadcasting came into being after WWII, Christians on both sides of the border did not give up in getting Bible teaching on Canadian stations. Probably, starting in the 1960’s, there were some brave broadcasters (no doubt through the persuasion of praying saints and giving friends) that started limited Bible teaching on their secular radio stations. I can remember that, way back in the mid 60’s, our local station in London, Ontario broadcast the teaching of Mr. Theodore H. Epp on Back to the Bible out of Lincoln Nebraska. 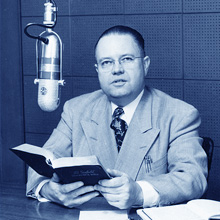 This and several other US Christian programs were rebroadcast on a number of stations in Canada. For this we, here on the north side of the border, were very thankful to the Lord and the management of those stations. For about 30 years, all Christian programmes produced in the USA were recorded on reel-to-reel tape recorders. These were duplicated and the tapes sent to each station in the US and Canada that carried their message. It is wonderful to recognize that the same government that banned Christian stations from being built and operated, carried the precious message of God’s grace and salvation through Canada’s postal service. And so, Bible teaching was made available to the Canadian Christian community through secular radio stations for a very limited time (1/2 to one hour) each day. That was great, but not quite enough for a number of us.

Alistair Begg has been in pastoral ministry for more than 30 years. Following graduation from The London School of Theology he served eight years in [...]

Wayne Weekly “For the Sport of It”

And the LORD spake unto Moses, saying, Speak unto the children of Israel, that they turn and encamp before Pihahiroth, between Migdol and the sea, over against Baalzephon: before it