Turkey (MNN) — The odds are terrible for children who enter the world bearing the label of “refugee”. A ministry partner of Christian Aid Mission estimates that 60 percent of Syrians born in Turkey in the last three years have some sort of physical disability. About 10 percent have emotional difficulties.

A Turkish ministry leader we assist shared with us that desperate Syrian mothers are leaving their young children alone in refugee camps while they try to find work in the city…they often return to find their children missing. The leader has started ministering to several of these mothers while providing them with material provision. (Photo and caption courtesy of Christian Aid Mission)

The ministry recently shared the story of a three-year-old boy who cannot walk or talk. Malnourishment is thought to be part of the problem. But children aren’t the only ones facing health problems. Deadly illnesses can fly through the camps, threatening people of all ages. And then there are the medical issues that come with time and genetics.

Van Valkenberg says, “Many, many people have serious issues, medically. And many of them really don’t have many options.”

Refugees face quite a few challenges when trying to get medical assistance in Turkey. To get government help, they’re required to have a resident card. In order to get that, they have to have an official address.

There are a number of refugees who refuse to risk the squalid conditions of the official refugee camps, and who cannot afford to share an apartment. They don’t have an address. Christian Aid’s partner suggests that 10-15 percent of refugees—those who have taken up shelter elsewhere—cannot get medical care. 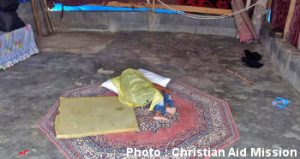 A Syrian child passes the night in dilapidated quarters in Turkey. (Photo and caption by Christian Aid Mission)

But even if they can, there’s another barrier entirely: language. It’s rare that both the doctor and patient know enough of either Arabic or Turkish to communicate symptoms and correctly diagnose an illness.

With these internal problems, medical aid from foreign groups is especially needed. But that doesn’t mean it’s readily available.

Turkey is the largest host of Syrian refugees. But, Van Valkenberg of Christian Aid Mission says, the amount of outside medical help the country receives poorly reflects that.

“Almost nobody goes to Turkey, even though Turkey has the highest number of refugees,” he says. Part of the problem could be that Turkey isn’t as easy for foreign organizations to work in as some of the other host countries.

The final problem is the relatively low number of Christians compared to other nations. In some areas, ministries are able to work with the local Church to fill in the gaps. But Turkey has a significantly smaller population of Christians. The local Church isn’t as extensive of a network.

Sadly, when foreign agencies do show up, it can add to the agony. Time and time again, these refugees have told their stories to foreigners who’ve seemed keen to help them. These groups leave behind the impression that they will return with the resources to do something. But despite their best intentions, that plan often falls through.

“I think that it’s pretty common for the refugees to be, I guess, jaded, because they are promised help by foreign groups, foreign people coming around, and often they don’t get any help.

“It comes across [as] empty promises,” he continues.

But God has connected Christian Aid Mission to local Christian ministries in the area who are reaching out to these communities with consistency. They are helping to provide for the many physical needs, including medicine. However, Van Valkenberg says it’s important that they are not only focused on answering the physical needs. They want to be able to share a hope that doesn’t disappear if humanitarian aid runs out. 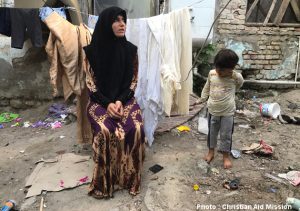 “That’s one thing they can offer is a hope that they don’t have right now, and the hope of Jesus Christ. The ministries that we assist will give out food and clothing and medicine, but I think that more than that, they listen to the stories of the refugees, and they cry with them and they’ll pray for them, and it gives the refugees hope that somebody does care.”

And even though the refugees don’t always respond right away to the presentation of the Gospel, it’s a message that they take with them, even as they leave the country. Some refugees have even contacted the ministry from their new host country to tell them they have accepted Christ.

Pray for the worker

There are a few ways you can respond to this story. First of all, you can contribute financially. Click here to do so.

But also you can pray. Van Valkenberg reminds us that while we should pray for the refugees, we also need to be supporting our brothers and sisters with prayer. Every day, they come face to face with situations that seem hopeless. They hear countless stories of loss and despair. And while they work to encourage these people, they need to be lifted up as well.

Get the Latest News & Weather

Bengali church planters and a need for the Gospel