These are the meeting places of the Eritrean Church. Over 100 believers have been arrested in Eritrea during the last month, but Greg Musselman of Voice of the Martyrs Canada says the recent crackdown is nothing new for the nation.

Fifteen years ago the Evangelical Church in Eritrea was growing. “The government was very paranoid and they saw Evangelical Christianity as destabilizing the country,” said Musselman. “They thought the Church would bring an American agenda to Eritrea and cause all sorts of problems.”

(Photo courtesy of Voice of the Martyrs Canada)

But that’s easier said than done since much of the persecution against evangelicals hasn’t been officially viewed as cracking down on the Church. “They’d say, ‘It’s more for political reasons, it’s not for religion.’”

“Christians started to meet in homes, but the government got wise to that and began arresting the evangelicals in church homes,” Musselman said. “They’d go to an evangelical wedding and arrest the bride and groom, and at one point there were thousands of Christians in shipping containers and military prisons all over the country.”

When even the leader of the Orthodox Church spoke out against the new, harsher persecution, he was removed from his position. Musselman said Christians and even non-believers began to leave the country “due to the oppressive nature of the government.” 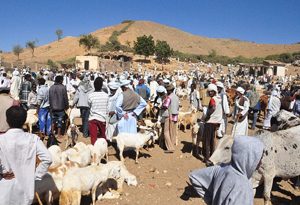 (Photo courtesy of Voice of the Martyrs Canada)

Now, the intensity of persecution is picking up again. Christians are forced meet in pairs or small groups in homes, cemeteries, and other locations hidden from the government’s eye. If they’re caught, they’ll be crammed into makeshift prisons built from shipping containers that are blazing hot during the day and frigid during the night. Many believers are forced into physical labor until they renounce their faith, and some prisoners who have refused to give up on God have been imprisoned since the crackdown began 15 years ago.

But that doesn’t mean they’re giving up. “Even in the midst of the persecution, the shutting down of the visible Evangelical Church, the Church is still growing and people are still coming to know the Lord.”

Want to help? Remember Eritrea in your prayers as believers face the ultimate price for their persistent faith in the Gospel’s truth.

Wayne Weekly “Over Your Head…”